Posted on October 28, 2013 by ukdesperatehousewifeusa

Charleston. One word? Classy. I liked it, mucho. We arrived on the Friday and there were a lot of ladies lunching (and drinking champers) in fine restaurants. You see? Just perfect for the Desperate Housewife!

Such a pretty town

Anyhow, we mooched, as one must in Charleston – oggling the houses, the history and the waterfront.

I was most delighted to spy a pink fountain (no doubt in recognition of breast cancer awareness of month).

This is a beautiful row of houses with an interesting history in Charleston.

After the Civil War, this area of Charleston devolved into near slum conditions. In the early 1900s, Dorothy Porcher Legge purchased a section of these houses numbering 99 through 101 East Bay and began to renovate them. She chose to paint these houses pink based on a colonial Caribbean colour scheme. Other owners and future owners followed suit, creating the “rainbow” of pastel colours present today. The colouring of the houses helped keep the houses cool inside as well as give the area its name.

Common myths concerning Charleston include variants on the reasons for the paint colors. According to some tales, the houses were painted in the various colours such that the intoxicated sailors coming in from port could remember which houses they were to bunk in. (I like this version the best.) In other versions, the colors of the buildings date from their use as stores; the colours were used so that owners could tell illiterate slaves which building to go to for shopping.

I also saw this sign, which I didn’t understand, but thought I would share in case anyone has any idea! 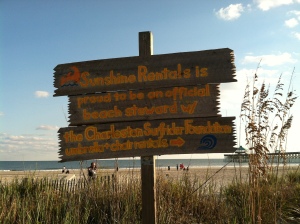 Known to Charleston locals as “the Edge of America”, Folly Beach is home to numerous surf spots, the most popular being the Washout, 10th Street and the Folly Beach Pier. Despite its usually calm conditions, Folly Beach has gained prominence as one of the more popular surf spots along the East Coast. Folly Beach is an eclectic beach community.

I think I need to spend more time here….

As we drove along the highway, we spotted this van. 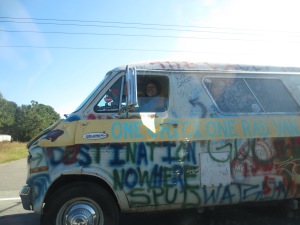 What a happy nomad chick!

‘On June 27, 2011 I made the best mistake of my life. I bought a 1971 Dodge Campervan. If I only knew then, what I know now. I now can completely relate to the old saying ” I’ve put my blood, sweat, and tears in this”. When it came time to pull the trigger, I was never so utterly scared and determined in my life. On October 23, 2012 the Van made her maiden voyage. Sure, this trip is about having the best time of my life, experiencing what the world has to offer. Deep down, I know this journey will define me, set the foundation for the rest of my life. Im out here on the road doing the good ole’ soul searching. Follow my nomadic ways here, you never know, we may just cross paths one day :-)’

On the road, I like to stop at places in America that aren’t chain places. I’m looking for rustic charm.

For lunch I was very specific. ‘I want it to be a run down shack that does amazing food and I need to eat shrimp gumbo or similar, please.

And would you bloomin’ well believe it, we found THE pefect place. It was this exactly.

And here it is.

Even the soda fridge dated back to the 60s!

See how happy I am! 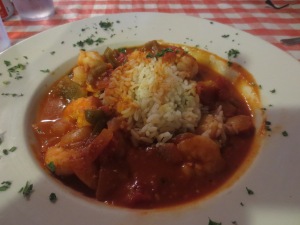 I wanted Creole Shrimp. I got it! 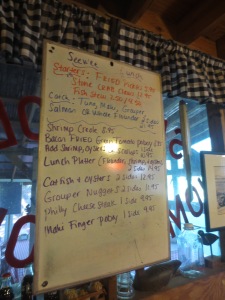 For a fish fan like me, so much to choose from 🙂

But, wait. Why is it called SeeWee’s? (Which is weirdly similar to the portable urinating device for women.)

It is named after the SeWee tribe. And here’s their sad, sad tale.

The Sewee Indians were a small tribe, supposedly Siouan, formerly living in east South Carolina. According to history they occupied the lower part of Santee river and the coast westward to the divide of Ashley river, about the present Monks Corner, Berkeley County, where they adjoined the Etiwaw. Nothing is known of the language, but judging by their alliances and their final incorporation with the Catawba they are assumed to have been Siouan. A man called Lawson, who met them in 1701, when they were living at the mouth of Santee river, states that they had been a large tribe, but had been wasted by alcohol and smallpox, which disease was commonly fatal because the afflicted plunged into cold water to alleviate the fever. At Sewer Bay he found a deserted village, Avendaughbough, which may have been one of their towns. Lawson says that they undertook to send a fleet of canoes to England in charge of most of their able-bodied men, for the purpose of trade; a storm swamped most of the canoes, and the survivors were rescued by an English ship and sold as slaves in the West Indies. In 1715 there remained but one village of 57 souls. The Yamasee War of that year probably put an end to their separate existence as a tribe, forcing the survivors to join the Catawba.

Note to self: don’t try to get back to the UK in a canoe 😉

That’s all for now, folks! Part 3 of the roadtrip will feature: the Magnolia Plantation and swamp, doing Halloween like a Yank and PJs at Walmart. Stay tuned! 🙂