Posted on October 20, 2013 by ukdesperatehousewifeusa

So, we return from our Florida holibobs!

Yes, the sun shone and it was super hot.
Yes, we got stuck at the top of the Hulk rollercoaster, and yes, it was scary…..
Yes, we saw geckos.
Yes, there are a lot of fast food chains.
Yes, I get a kick out of hugging people dressed up as movie or cartoon characters.
Yes, we got wet.
Yes, there were a lot of Brits at Universal.
Yes, we did rescue a turtle who was walking slowly across the road and very nearly getting squished.
Yes, Florida is like the British equivalent of having the Canaries near to us (for us in Howard County, anyway).
Hoorah for Florida!

And no, we did not do Disney, except for Downtown Disney (next year we’ll do Disney). 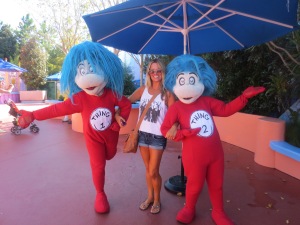 Thing One and Thing Two and Me!

And the main reason I like these places in the USA, which, let’s face it, the Americans do so well? Escapism. Fun.

Sure, they are bright, bawdy, brash and they eat up the power and energy of the land in a not-very-green way (guilt trip ensues) but they are a hell of a lot of fun for the tourist.

While I was away…

1. The government re-opened its doors! And about flippin’ time too!

My friend sent me a link to a commentary about America in the context of the government shutdown, by none other than Monty Python comedian Eric Idle. What’s he got to say about it all I wondered? Surely he must be something spouting forth something Monty-Python-esque like this…?

Dennis: Come and see the violence inherent in the system. Help! Help! I’m being repressed!
King Arthur: Bloody peasant!
Dennis: Oh, what a giveaway! Did you hear that? Did you hear that, eh? That’s what I’m on about! Did you see him repressing me? You saw him, Didn’t you?

‘Carl Reiner on Twitter last week, worried about the current government shutdown, said this was cause for great concern in the world’s leading democracy. And I thought, leading? Who’s following? The answer would appear to be no one.

After one of the recent school shootings, a young mother said to me, “What must you think of us? You must think we’re all mad.” Mad certainly, but not all of you.

The other half does seem to be, well, nuts.’

Anyway, here’s the article in full…..

Monty Python says it how it is…

See?! All the leaves are browny/orangey/yellowy (and the sky is blue!)

I bought my other half John Steinbeck’s Travels with Charley: In Search of America, which is a travelogue written by American author John Steinbeck. It depicts a 1960 road trip around the United States made by Steinbeck, in the company of his French standard poodle, Charley. Steinbeck wrote that he was moved by a desire to see his country on a personal level, since he made his living writing about it. He wrote of having many questions going into his journey, the main one being, “What are Americans like today?” During his journey he found that he had concerns about much of the “new America” he witnessed.

I confess I bought him this book because I also want to read it before we go and see the ‘real America’….

And I think now my other half is planning our road trip next year in Steinbeck style….we just need a poodle 😉

Expats in the USA

If anyone ever has doubts moving to the USA as an expat, I say it’s primarily about a union between you and a whole country, and in order for you and the USA to be compatible, you’ve got to take a deep breath and be like this (below), as much as you can. Only then will you fully appreciate it.

That is the end of today’s sermon 😉

This is how to be an expat