Posted on September 30, 2013 by ukdesperatehousewifeusa

I am confused. This is because I don’t really get what the statement above means. Stuff is shutting down, everybody in the government / public sector goes home early and doesn’t work and you can’t call any numbers or get any services…. that’s a typical Friday afternoon in government, right? 😉 So what’s different?

A Dumb Brit’s Guide to the USA Government Shut Down

1. What’s going on? Well, it’s been 17 years since the federal government last faced a partial shutdown because Congress and the president couldn’t agree on a spending bill. A lot has changed in that time, leaving federal employees, citizens and even government decision-makers confused about what a shutdown would mean. Please include me (expat) in that ‘confused’ list. Now I can join a Club for Confused People 🙂

2. When would a shutdown begin? When the fiscal year ends at midnight Monday – that’s today! Most federal workers would report to work Tuesday, but unless they’re deemed “essential,” they would work no more than four hours on shutdown-related activities before being furloughed. Who is essential? I hope the people who do the school lunches are essential, because Harry can’t bear the packed lunches I make and he will be all grumpy and have a rumbly tummy if the school lunch people aren’t essential. Actually, I don’t even know if they are government workers, I’m just trying to put it into context for myself 😉

What will be on the Shutdown Menu?

3. When would the shutdown end? Immediately after the president signs a spending bill. As a practical matter, it could be noon the following day before most government offices that were shut down would reopen their doors. I think I may use this argument with my other half next time he has a moan about my spending bill…I shall refuse all services as a desperate housewife. And I mean all. Then we’ll see who’s going to have a pop about my spending bill.

4. So what will be affected by the shutdown?

Will I still get my mail? Yes. The U.S. Postal Service functions as an independent business unit. Good stuff, I am awaiting some highly essential shoes in the mail.

Can I get a passport? Maybe, but hurry is the advice. I don’t need one, I hasten to add – I’m just trying to be helpful in case you do.

Can I visit national parks? No. The National Park Service says day visitors will be told to leave immediately, and entrances will be closed. I may just go to one so that I can be ushered out and told to ‘leave immediately’ so that I can experience the shutdown affect in full swing. Apparently campers already in the parks have two days to pack up and leave. This still does not make me want to go camping, even if it means some leeway on the rules.

Will Washington museums be open? The Smithsonian, the National Zoo and the Holocaust Museum would all be closed. Private museums, such as the Newseum, the Spy Museum and Mount Vernon, would remain open. Rule of thumb: If it’s usually free, it’s probably closed. So there we have, if it’s free you can’t get in. 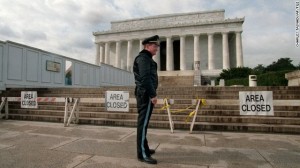 Want to have nose round here? Think again!

Oh my, I have found one about school lunches….

And the federal school lunch program? It is expected that most schools will be able to continue providing meals through October. Phew and hoorah!

Anyway, there are lots and lots of questions that are far more serious than mine involved in all this and whilst I jest, it ain’t no laughing matter for employees, recipients of services and those seriously impacted by the shutdown.

I can’t quite work out what to expect if there is no agreement, but I tell you one thing – it’s all an experience in the USofA!

I had forgotten how dreadful some British food can be. Here I am harping on about American food, and this picture (shared by https://www.facebook.com/quitepeckish) made my stomach turn 😦 Oh, the chippy, how I don’t miss thee! 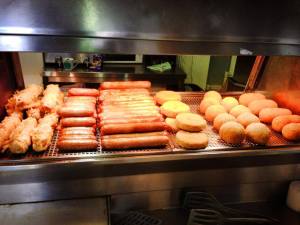