Posted on September 28, 2013 by ukdesperatehousewifeusa

Today I headed out at 6am to a training in DC. I hadn’t been to South East DC before. The advice we get as Brits here is that if we find ourselves in this area, just head North. It has a reputation, I am led to believe.

Anyhow, I wanted to see it, of course.

What struck me was that at 7am, as I reached areas that were so obviously ones of homelessness and poverty, were the food queues at the Soup Kitchens. There were people crowded on the street outside one soup kitchen – and they were predominantly black males. It was a sad and humbling sight to see as I am sipping my smoothie, passing them by. I am reminded of the poverty in DC and the bubble in which I live in Columbia. 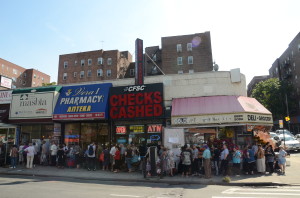 I didn’t take any shots of the soup kitchen queue, out of respect, but this is one in Brooklyn, and it looked very similar.

And as I sat at the traffic lights and one man worked the line begging and as I passed a dollar bill through my window, I hoped he would use it wisely…..

The area I reached was a conundrum – a real dichotomy. There were iron bars on doors and windows of houses, the area was diverse in terms of race, and some of it was completely run down, with desolate houses and graffiti next to trendy wine bars, and there were rich-looking women in open top cars and people walk their foo-foo dogs adjacent to crowds of kids on the street corner mooching about on bikes with rap music blasting. Fascinating.

Today I could have gone to a Fall Festival in Columbia and Music Festival in Ellicott City and a Rodeo near Frederick, all of which would have been fab, but instead I saw this and for some reason it had much more of an impact on me – probably because I saw a different America today. 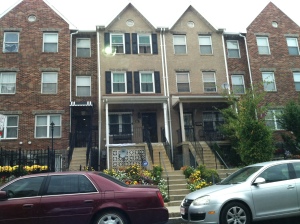 Super smart houses, all with bars on the doors and windows

Some areas seem untouched by regeneration 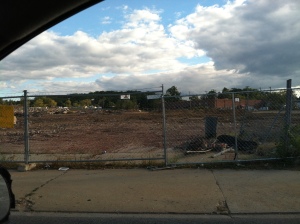 It felt industrial in parts

Today a heritage group, the Virginia Flaggers, raised the Confederate flag along the heavily traveled I95. Many residents of Richmond about 10 miles north up the highway have protested, saying the banner is a symbol of ‘slavery and bigotry’.

Hundreds of people turned out today to celebrate the raising of a Confederate battle flag, an event that has stirred strong opposition from those who view the flag as a symbol of division.

Those who attended the raising of the 15-by-15-foot flag from the Army of Northern Virginia said the ceremony was not intended to offend, but to honor the South’s war dead in the Civil War.

The Washington Post reported that ‘the opponents gathered nearly 25,000 signatures for on an online protest petition, and have encouraged residents of the former capital of the Confederacy to display American flags outside their homes and to flood social media with images of the stars and stripes.’ An American flag approximately 60 feet wide was unfurled at a construction site in downtown Richmond about noon today. 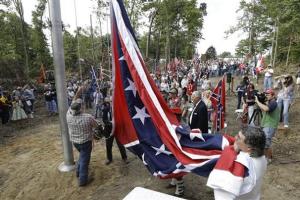 The private land, on which the Confederate flag flies, was donated for the purpose of permanently flying it near a highway where it can be viewed by tens of thousands of people daily. From the highway, the bright red and blue of the flag’s stars and bars can be seen through the trees.

According to reports, a rendition of “Dixie” was sung and a bagpiper played “Amazing Grace.” Small Confederate flags were handed out and water was distributed in bottles with the name “Dixie Pride.”

Susan Hathaway, a member of the Virginia flaggers, told the crowd Confederate symbols are being snuffed out and they have a duty to responded when the South’s “honor is attacked.”

“As sons and daughters of the South, we have inherited a birthright. Ours is a proud heritage,” she said. “We are descendants of Confederates, we are friends of Confederates. … The flag that is being raised today will be a living, breathing memorial to our Confederate dead.”

Online postings of the event commented that as the flag was unfurled and hoisted up a pole it was greeted by ‘hoots and hollers and more than a few rebel yells’ and a ‘volley of rifle fire sounded as the flag flew.’

One-hundred-and-fifty years after the Civil War, the Confederate flag still evokes strong emotions in the South.

Earlier this year, a Confederate battle flag that hung inside the old North Carolina State Capitol to mark the sesquicentennial of the Civil War was taken down after civil rights leaders raised concerns.

I communicate with a gentleman called ‘Southern Gent’ who wished to attend this event today in support of the flag. I wonder if he went and what he made of it. It’s such a controversial topic, and one that I am finding puzzling and intriguing both historically and currently.

Next weekend is the Highland Fair in Howard County and it’s all pumpkins and Halloween parades and stuff like that. Lovely!

But what I really want to see is the pie-eating contest! Excellent! It reminds me of that scene in the movie Stand by Me. I might even participate, who knows!

Today I confirmed to myself that I have started driving like an American. Undercutting on the inside lane, not indicating, pulling out and speeding up. Oh my! What’s happened to my British Highway Code?!