Posted on September 11, 2013 by ukdesperatehousewifeusa

I had not yet experienced the DC Metro until this Sunday. The event itself was pretty, well, pretty uneventful. But I wanted to get a sense of the Metro. Of course, on Sunday, you don’t really get a sense of anything apart from people mooching on and off trains and around the town. There is none of that mad dash city commuter rush thing going on.

Ain’t that just an American thing?!

How did it compare to the London Underground, that hectic maze that had once taken me from home to work and back again on a relentlessly monotonous daily basis? From north London to South London, an hour door to door, I was like a catatonic robot on the tube, standing in the same place, reading the same bits of the Metro at the same stops, getting off at Finchley Road, Green Park, Lambeth, almost always in the dark, in the grime, under the cobbled streets of London that echoed with murders, mayhem and history past….. ooh, I do fancy myself as a bit of a Victorian mystery writer.

Anyway, I digress (again). The DC Metro was quite favourable, all said and done. Pretty easy to navigate, not too dirty (okay, a bit dirty, but so is the Tube on some lines), and speedy enough to get to our destination. I would have liked to have found the owner of the over-sized false eyelash stuck to my seat and ask about her night out, but it was not to be. 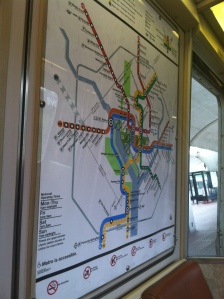 In the end, I chose a [disappointingly] mildly inappropriate outfit.

That aside, the USA elementary schools sure know how to put on an event. It was like a mad disco on the school playground, with free popcorn and loads of really cool fun stuff. And the PTA.

Let’s discuss KonaIce. This is not a UK thing, and I have yet to understand its appeal. It is ice that you pour colourful liquid sugar on and eat, and then your mouth goes the colour you chose and the ice melts and it’s all a bit of a messy slush (actually, saying that now it sounds a bit like Slush Puppies…). Anyways, the kids LOVE it! And the queue was loooooong to get your KonaIce. Oh, yes it was. 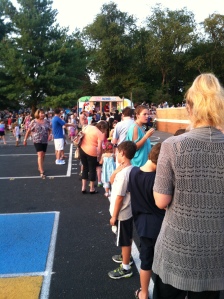 During this tedious time in the queue for KonaFriggingIce (not for me, I hasten to add) I heard a shout out by the DJs for the ‘parents of Harry Winston’. Yes, that will be my son who has lost his parents and cannot find them anywhere. My first ever ‘lost child’ shout out! What will the PTA think?!

Anyhow, you will be pleased to know that we got our KonaIce in the end! Hurrah!

Noted at the picnic – only blimmin’ Ken Ulman, HoCo Chief Executive, and his hot patootie wife Jaki keeping it real! Bless their normalcy (in the UK I think we would say normalness or normality, though know I’ve said both of those neither of them seem right….). Try again – kudos to the Ulmans for being regular folk 🙂 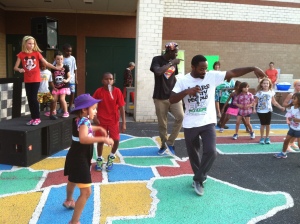 Now that’s how to do a school playground disco. Good job, PTA……