Posted on September 9, 2013 by ukdesperatehousewifeusa

I don’t know enough about the Civil War, as I’ve said before, apart from that which I’ve gleaned from movies and TV series.

So a trip to Gettysburg was what was needed to rectify that.

If you haven’t been, go. You will most certainly feel educated, inspired and humbled, whatever your slant on the war.

Apologies for the number of pictures, but the landscape, scenery and monuments were just too breathtaking not to share. 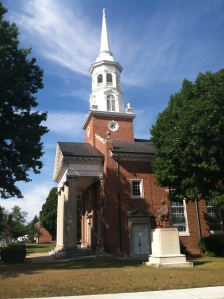 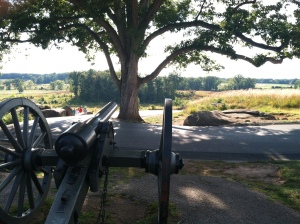 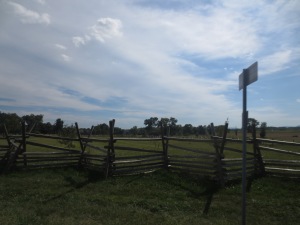 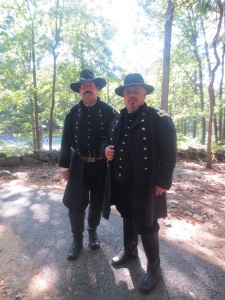 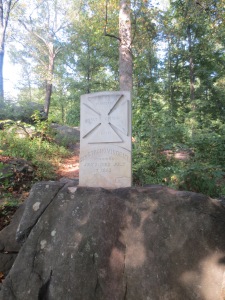 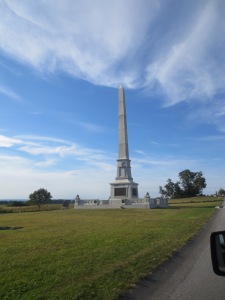 Now I need to watch all my favourite Civil War movies again, bearing in mind the Gettysburg Battle, the Gettysburg Address and all that I learned (with our own personal tour guide, who gave a roaringly bloody account of some of the battles).

Awesomeness, I declared as we drove away……for this could have been a very different America if had not been for that battle. After all, the American Civil war began in 1861, and lasted four grueling, horrific years. It took the lives of over 650,000 men, and left countless others horribly mangled. It was a war that almost tore the nation apart, and might very well have done so had it not been for the Union victory at the battle of Gettysburg. A truly historic place.

So, what do we Brits know about Sororities and Fraternities? Bugger all, I do declare. It’s not part of our culture.

Good job, then, that I know a couple who are married and met through their ‘frat’ and ‘sorority’ houses at University.

They are a ritual, a rites of passage, for any University student in the USA it seems, and recruitment is tough, routined and highly organised.

Not at all like our Freshers’ Fayres at the UK unis, then, where the clubs would set up a wobbly stand, stick a few Post-Its on and attempt to spell the name of their club in cut-out letters which they placed on a board with unsticky blu-tac.

No sororties or fraternities in the UK

The club captains would then either:

a) mumble at passers-by about how exhilarating it would be to join the Crossword Puzzle Club and offer non-alcoholic pop in a cracked plastic cup and free thesaurus; or
b) dress up as a C*CK and/or jump about in your underwear, offering free shags with the hockey team and a shot glass of ArseBurner if they signed up to the Football Club.

Anyway, we digress. Back to American universities.

Fraternities and sororities (from the Latin words frater and soror, meaning “brother” and “sister” respectively) are fraternal social organizations for undergraduate students. In modern-day as it is, the term “Greek letter organization” is often synonymous in North America, with the terms “fraternity” and “sorority”.

Apparently, ‘typically, Greek letter organizations are gender-based initiatory organizations. Membership is typically considered active during the undergraduate years only, although a notable exception to this rule are historically black, Latino, Asian, and multicultural organizations, in which active membership continues, and into which members are often initiated long after the completion of their undergraduate degrees. As with Freemasonry, Greek letter organizations may sometimes be considered mutual aid societies, providing academic and social activities. Some groups also maintain a chapter house, providing residential and dining facilities for members.’

So, I begin to understand how it is constructed – but I want to know how it WORKS, what it feels like to be in one and what it means.

This is what I learned from my friend’s account of sororities at her University….

1. Yes, there is Jello wrestling in some houses by some fraternities (good to hear). But, hazing does exist, and it generally involves the Red Solo Cup and little clothing…

2. There is something called Greek Week. Greek Week is usually a three-week period in April where Greek students participate in programs and events that celebrate the values of the office of Greek Life and promote a fun environment, highlighting the talents and dedication of the Greek Community to their city, town and university. The mission of Greek Week is to develop and maintain positive relationships within the community, the campus community, and the Greek community. And sororities and fraternities win stuff for being ace at things.

This is part of the Greek letter thing and has very strict rules.

Here are some of the rules:

‘All Greeks must remember that when in public they are representing not only their own organization, but also the fraternity/sorority community as a whole. Keep in mind that there are families and non-students who also share our community. Give them the respect they deserve.

‘No alcohol is permitted at any event. If alcohol is found on an individual at an event that is grounds for disqualification of your chapter from Greek Week as well as potential conduct/judicial repercussions. If an individual from any chapter, including alumni, appear to be intoxicated at any event, public safety will be called with the possibility of disqualification from Greek Week. These rules regarding alcohol at events apply regardless of age. Social events with alcohol will adhere to all councils’ and FSL social policies. All Greek Week events should be over no later than 11:00pm; however times may vary.’

3. You can get in a fraternity of sorority based on all sorts of attributes, but if you are a high performing academic or achiever then you are looked on my certain sororities most favourably. It also kind of helps if you are nice, cool, philanthropic, kind, good-looking and drink beer. Except if you are in the Goth Fraternity, which I think might only require the latter attribute, along with wearing black and doing your make up like Robert Smith from The Cure.

Oh my, is this the Desperate Housewife sorority?!

4. If you get married after having met and been in a fraternity and sorority your ‘brothers’ and ‘sisters’ will sing a song and maybe do push ups (if applicable) at your wedding as part of the ritual. Most excellent.

5. If you wish to get into a sorority, the ‘bigs’ (elders) will discuss the candidacy of each girl who wishes to be a new recruit (a ‘little’). They look at their perceived pluses and minuses, grades, personality, social ability and if they have caused any trouble.

Doing some good in the community with your sorority.

6. There are different personalities of sororities – maybe academic or historical buff, or lip gloss and pink heels girlygirls. Or there might even be an anti-sorority sorority. Interesting.

7. One sorority had a t-shirt for their girls to wear which read ‘I’m the kind of girl you can take home to meet your mom, but I will also drink your dad under the table.’ Ace.

Get your Greek letter hoody (or Farmhouse one, if available)

8. Once you’re in a sorority you know secret stuff about them and you can’t go into another one for period of time. In case you share said secret stuff, innit.

9. The traditions and rituals of the fraternities and sororities are kept alive and are part of the graduates’ personality and resume as they go on through life.

10. Not everyone chooses to join a sorority or fraternity. They just go down the pub/bar or don’t go out of their rooms ever. 😦

I wanted my friend to tell me what group I would be part of. She chose the lip gloss/pink sorority, and then the academic one too, for good measure 🙂

I want to be part of an honorary sorority. Either that or I’ll repeat my Humanities degree, just to find out what it’s like.

I’ll just have to enroll next year and set up my own sorority….now what should it be called….? 😉