Posted on August 28, 2013 by ukdesperatehousewifeusa

Today marks the 50th anniversary of Martin Luther King’s ‘I Have a Dream’ speech. A pretty special day in the USA, I would say.

The main man himself

Bells from churches, schools and historical monuments will “let freedom ring” in celebration of a powerful moment in civil rights history. More than 300 sites in nearly every state will ring their bells at 3pm their time today, or at 3pm EDT, the hour when King delivered his “I Have a Dream” speech in Washington.

A reminder of that MLK said on that momentous day:

“I say to you today, my friends, though, even though we face the difficulties of today and tomorrow, I still have a dream. It is a dream deeply rooted in the American dream. I have a dream that one day this nation will rise up, live out the true meeting of it’s creed: “We hold these truths to be self-evident, that all men are created equal.”
Martin Luther King, Jr., 1963

So, Canada. It sits gently above the USA, it has that massive waterfall, mountains and whales and beavers and it speaks with respect about its people of the First Nation.

But, what else of the quiet neighbour attached to the USA?

Not so quiet, actually, and definitely quirky – that’s what photographer Naomi Harris found out. Naomi is a native of Toronto and became a naturalized US citizen earlier this month after living in New York City for 16 years. She embarked on an epic 4 month journey across Canada in 2011, creating these amazing, almost cartoonish, portraits of people from all walks of life. 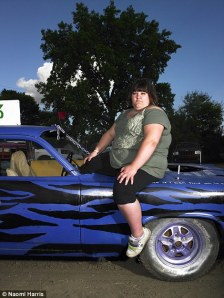 At a demolition derby in Weyburn, Saskatchewan 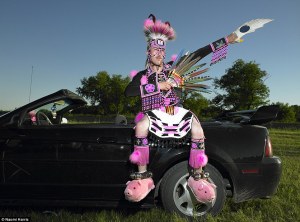 I love these pictures! I think, sometimes, from a UK, and possibly a U,S perspective Canadians are perceived as exceedingly polite, straight-laced and a bit boring, but the subjects in Harris’ series of photos (nicely titled ‘Oh Canada‘) are anything but. And I love that!

Now, I have Canadian relatives, so I know that Canadians are anything but boring, and these photos highlight for me that, whilst Canada may well be considered the ‘quiet neighbour’, it also oozes character, diversity and charm.