Posted on August 25, 2013 by ukdesperatehousewifeusa

It’s August isn’t it? Still summer, correct? Not in the commercial world….it’s still 60 something days until Halloween, but already the candy adorns the shelves.

A Brit in the USA has written about her views on Halloween in the USA…… I’ll be honest, I thought it was hilarious last year (despite the plethora of candy being shoved in plastic pumpkins). I might even dress up this year….

Yearbooks
Yearbooks are pretty much American school things, though I seem to recall something similar attempting to rear its head in the UK at some point, though I suspect it didn’t do terribly well.

Apparently the Yearbook is V V V V important in the USA, and this Facebook conversation that I picked up on demonstrates how terribly important it is, not just to the kids, but to the parents. And, in some ways, it also amused me, but in a nicely amused way. So many views and opinions on Yearbooks – I had no idea the passion behind them!!! Oh, the trials and tribulations of being a parent in the USA! 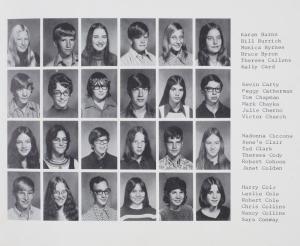 How times have changed since this yearbook!

FB Status
‘So …. the much awaited 2013 Yearbook arrives – disappointed to say that despite the fact that we have spell/grammar check in today’s technology, the yearbook is CHOCKFUL of errors including noting students on incorrect pages, typos throughout including the misspelling of the word Journalism. So after 4 years of writing papers, proof reading, etc – this is part of my boy’s reward (ultimately, diploma most important here)?! Heartbreaking…hoping class of 2014 receives a better product.’

Response 1: Frustrating to say the least. In my son’s school they put Brandon’s name instead of Brian’s for his 3rd place finish at the State track meet.

Response 2: One year Reservoir High’s yearbook had Reservoir misspelled on the cover of it! LOL!

Response 3: Actually would like to see a few less pictures… so the ones they do include are large enough to make out.

Response 4: I have complained several times to the appropriate people at school about the numerous mistakes made every year. My daughter’s picture went missing from her sophomore yearbook and I was refused a refund!

Response 5: Not to mention that the Dance Team, that practices 12 hours per week, performs at Football, pep rally, basketball, and competes all winter and Spring, culminating with a state championship showing of 6 routines, placing in 4 of them mind you, does not even get a single page or team photo except for a few candid’s at the spring trip. There was a page titled silks and drill team with not a word or picture on it about the dance team. Unbelievable! Oh, but the book club which meets once a month got a half page spread. Also, my daughter’s name was misspelled different ways almost every time it was listed. So sad for my daughter that the activity that she poured her heart and soul into for 4 years, did not seem to even exist in this book her senior year.

Response 6: Orchestra didn’t even get a page… ridiculous.

Response 7: I did see a page that said Orchestra, but most of the pictures on that page were actually of the concert and jazz bands.

Response 8: One picture of the teacher and the orchestra. No words written about the group, symphonic didn’t really get recognition either! But if you notice, the sports pages were pretty detailed…

Response 10: Set them straight ladies. You paid good money for those yearbooks.

Response 11: We offered our “mom’s” assistance in proofreading after seeing the atrocities in the 2006 yearbook. What can we do? It has not improved in all these years? This definitely needs adult supervision.

I chanced upon details about the USA minimum wage recently and it read thus: ‘One of the goals of the 1963 “March on Washington for Jobs and Freedom” was a $2 minimum wage. In 2013, that would equate to $15.27 an hour. The current federal minimum wage is $7.25.’ (Courtesy of Tom Coale, District 9B.) 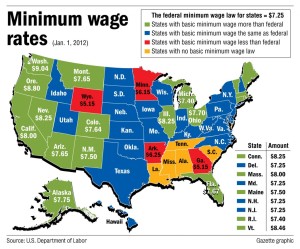 Which made me wonder how this compares to the UK minimum wage….

Ziploc bags come in all sizes

Bugger, I only have one size 😦

Who knew there were so many Ziploc bags to choose from?!