Posted on August 23, 2013 by ukdesperatehousewifeusa

So, when we stay in hotel rooms I get the joy of flicking through American TV channels. It’s a whole new world of crazy TV shows – but even more mind-blowing are the commercials (adverts, I know!)

The one that had our jaws dropping to the floor was Peter Popoff’s gobsmacking declaration that his ‘miracle spring water’ can get you out of debt and that it the same spring water that God used. WTF?!!!!!!!!!!!!!

Are people really falling for this load of claptrap?! Apparently so, according to ‘faith healer’ Peter. And why, if he is so dodgy, which he clearly is, are they letting him still advertise his nonsense potion?

So, who is this wheeler-dealer taking people’s money and passing off flat Mountain Dew as the world’s solution to poverty?

Peter Popoff is a self-proclaimed prophet who conducts revival meetings and has a national television program. He initially rose to prominence in the 1980s, but went bankrupt in 1987 after skeptics James Randi and Alexander Jason exposed his method of receiving information about revival attendees from his wife via an in-ear receiver. According to Fred M. Frohock, “the case of Peter Popoff is one of many egregious instances of fake healing”.

Sigh, get him off the air! (Although, to be fair, the fact that he was on air in the first place at least made for some amusement and this subsequent blog!) 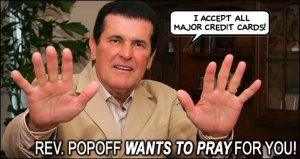 We Brits might refer to him as a tw*t 😉

So, today I experienced my first ever PTA thingymabob at the Back to School parent’s orientation meeting.

All kind of nonchalantly I mooched into the main hall at the school to be faced by a room of 400 parents, and there I am in my Daisy Dukes and my (still wet) bikini – I had just come from the pool, of course! – with just a light top thrown over….

‘Oh my, oh gosh,’ I think as I seem to flip-flop eveeerrrrrr sooooo sloooooowly allllll the waaaaay to the end of the room, past all the fully-clothed parents. Yes, all the other children’s parents appear to have put all their clothes on for the PTA meeting. I note there is even a woman in tights. ‘Why is she wearing tights?‘ I think to myself as 400 pairs of disapproving eyes follow my barely-covered arse to its seat. 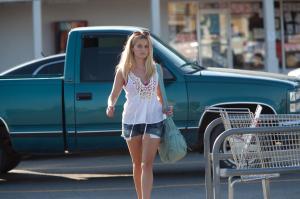 In retrospect I was dressed in not a dissimilar fashion from Reese’s character in ‘Mud’ (which has a touch of the ‘To Kill A Mockingbird’ about it). It has just dawned on me, however, that her character is what’s known as ‘white trash’…..oh dear me.

Well, once sat I decided to be a model parent and listen attentively.

I noted the following:

1. I am expected to do things with cookie dough. I don’t know what, and to be frank, the thought of it frightens me slightly.
2. There appears to be an obsession with Ziploc bags. Everyone must have a Ziploc bag in their backpack and anything that comes to school must be in a Ziploc bag, and that Ziploc bag should have your child’s name on it, and probably be in another Ziploc bag to keep it safe. I don’t have any Ziploc bags. They are now, of course, on the shopping list.
3. I am expected to volunteer for things, though I am again unsure what that entails, though given my initial appearance they might well consider me for fundraising car washes in the style of Cameron Diaz’s Bad Teacher…..(I guess that would make me Bad Parent). 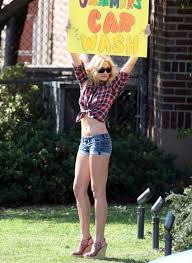 So, obviously, I mentioned my escapade on Facebook: ‘Yep, typically inappropriately dressed in bikini and Daisy Dukes for the parents’ school orientation meeting.’ Which was met with resounding cries (posts) of: ‘Harper Valley PTA!!‘

And here is that very tune for your delectation.

(I had no idea there was a movie about it!)

Anyway, the PTA can call me if they want me! (But, unlike the movie, I shan’t be running for PTA President, just for the record.)

American public school system, I’m ready for you….are you ready for me?! 😉