Posted on August 16, 2013 by ukdesperatehousewifeusa

Today I was in Annapolis with Harry, having a mooch about the streets and lanes around the waterfront before boarding the Pirate Adventure ship. Annapolis is a lovely, genteel, historical place of nautical heritage and views of the Chesapeake, vintage shopping and waterfront eateries. It is wealthy and rather quaint. 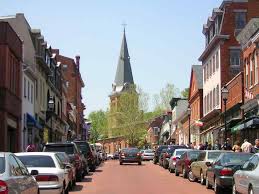 Anyhow, as we are mooching along from our restaurant, having enjoyed fish tacos whilst overlooking the harbour, and two youths who were on the other side of the road spoke to us thus: “Blow or sauce?” I shook my head and carried on and they asked again, so I said “No thanks” and off we skipped on our merry way.

(I confess I had to double check ‘sauce’ on Google to make sure that they weren’t actually offering me bottle of ketchup at a great deal, but as I thought it confirmed I was being offered, as well the marjuana (blow), cocaine (sauce).)

What I found interesting was the reaction to this event, which I brushed off with this thought process: no harm done, Harry had not a clue, the lads were not in my face, yes I was surprised by it, and a little shocked that it had happened in pretty little Annapolis, but such is life and at least I could blog about it later 😉

(BTW, incase anyone is worried, I did tell the Pirates and they wanted to go out and get them with their cutlasses and hook hands, but then decided it was better just to call the police to inform them 🙂 )

So, I put this about it on Facebook after it had happened: ‘Two young gentlemen just asked me if I wished to purchase some 'blow or some sauce'. I declined politely. This is Annapolis! My sensibilities are rocked ;)’ (Note the wink!)

A reaction that I received from an American friend read thus: ‘Claire, why do you refer to these two people as gentlemen? They are drug dealers, and it does you no harm to refer to them correctly as dealers, not gentlemen. A gentleman is concerned about you and your well-being. A drug dealer just wants your money and doesn't give a damn about you. As for Annapolis, I would think it is a great place to sell drugs, the people are well off and naive, and they don't report dealers.‘

So, he's right, of course, they are drug dealers, but that is not what stood out for me about this response. It's nothing to do with the drugs, but about the difference between the American and British senses of humour and the use of sarcasm and irony.

I was being deliberately sarcastic about these two lads being 'gentlemen'. Of course they're not gentlemen! I was being intentionally ironic about their status; that is I was using the word 'gentlemen' to convey a meaning that is the opposite of its literal meaning (which is probably 'scumbags').

So this leads me on to the subject of irony, and why do the Brits use it so much more than Americans?

Some examples of the British psyche….

Receiving an award at the Oscars – his second of the night – Ricky Gervais proffered the statuette and said simply: “Two bookends. Excellent.”

Los Angeles-based British actor Tim Curry didn’t pause for a second when asked what he missed most about the UK. “Irony,” he replied.

However, mega-hit shows such as The Simpsons, Friends, Seinfeld and Frasier, consistently use ironic situations to create comedic moments, and us Brits love them, right?!

Stand-ups such as Billy Crystal use irony as a staple of their act and the glorious M*A*S*H, from the 70s, had scripted banter dripping irony. How we loved M*A*S*H in the UK!

Reminder about irony again…..
‘Ill-timed or perverse arrival of event that is in itself desirable’
‘Literary technique in which audience perceives meanings unknown to the characters’ (Both from OED).

But some purists argue irony has wrongly become a synonym for sarcasm (oops, naughty me!)

Yet, in the UK we still believe that most Americans don’t get irony – I think my Facebook friend didn’t get my ironic intention in just that way.

David Freedman, a US comedy writer who now lives in the UK, believes the truth lies somewhere in between.

He says: “Americans do get irony, but to them there’s a time and a place for it. The time and place is in the evening, sitting down in front of the latest blockbuster sitcom.

“Where you get into trouble is dropping irony into an everyday conversation in America. In Britain you hear it all the time – irony and its more unsophisticated cousin, sarcasm.

“Americans, and I include in this my mom, take themselves too seriously to appreciate irony in everyday conversation. They don’t have time for it.”

What I find interesting is that The Office, Ricky Gervais’ masterpiece, was remade in the US, with different scripts and actors, and whilst it is very, very funny and brilliantly characterised, it doesn’t have quite the same tone to it. But you gotta make it for the audience, right?!

There’s only one David Brent

But despite it all, Freedman concludes: “There’s no doubt the Americans have a sense of irony. If we didn’t we’d have thrown out Rhode Island years ago. That’s not a state. You can walk across it in about five steps.”

Interestingly (ironically?!), the best, and most witty, response to my Facebook status was from my American friend: ‘It must be a nice area, otherwise they would have offered you rock or crystal!‘

According to the Baltimore Sun the University of Maryland Eastern Shore is adding a new piece of equipment to its classrooms – yep, bulletproof whiteboards. Golly gosh.

The school plans to spend $60,000 on bulletproof white boards because (say school officials) campus violence is a reality. They state that the bulletproof boards can provide a personal shield for professors under attack.

I couldn’t but help a wry smiles at this part of the report: ‘The high-tech tablet — which hangs on a hook, measures 18 by 20 inches and comes in pink, blue and green — can be used as a personal shield for professors under attack, according to the company that makes it, and a portable writing pad in quieter times.’

I remember when you could get detention for throwing a paper aeroplane at the chalkboard. How times have changed……

On a more serious note, this is the reason, the maker states, that these boards have come into being: “When Sandy Hook happened … a light bulb went off that it’s really the teachers and administrators who need protection. Those brave souls were trying to close the gap and get to the shooter and stop him, but they didn’t have anything that could stop the bullets along the way.” 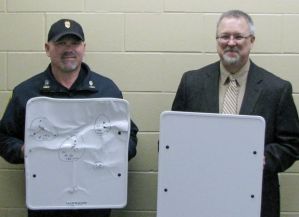 How a bulletproof whiteboard can save lives

So it’s high-profile incidents like Sandy Hook and the 2007 mass murder of 32 people at Virginia Tech which ultimately have led to the development of such a thing as a bulletproof whiteboard. That’s how it is today, sadly.