And that’s the baby’s name! So now we know. Job done. Not Wayne, or Gary, or Alan? Nope, it’s as royal as they come (a little French royal even…!)

It’s as the title says, this is a one-room schoolhouse building that was constructed in 1880 as the first public school for black children in Howard County.

It was in use as a school until the early 1950s, and then the building was re-purchased by the county in 1995 and restored with the assistance of public and private funding. The building, located at Frederick Road, Ellicott City, now houses a genealogical resource center and a museum chronicling the history of African-Americans in Howard County.

The schoolhouse exhibits highlight the contributions by people of color/colour to the history of the region.

It’s fascinating. And makes you think, doesn’t it….?

It makes you think even more when you realise that only last year the Howard County school board apologized for the system’s treatment of African-American students during segregation. One woman, Dottie Cook, says in the 1950s she received a hand-me-down education that included tattered books with her uncle’s name written in them.

An African-American resident from Dayton, Dottie said her family petitioned the Howard school board to allow her to go to a school that white students attended — a more modern school with new books — and they were told she could but only if she got permission from the bus driver to be taken there.

The papers from the day

You just have to read her story……

It wasn’t until 1954 that the US Supreme Court’s historic Brown vs. Board of Education of Topeka, Kan., decision outlawed segregated public schools. Howard County, apparently, was not alone in taking years to fully integrate schools. According to an article in The Baltimore Sun at the time, only a handful of counties in Maryland had fully integrated student bodies and faculties as of August 1964. In contrast, Baltimore City’s schools were desegregated shortly after the Brown decision in 1954.

A wonderful image from 1954

I’m so, so glad that things are different now, Howard County. Not perfect, but certainly vastly different from 1954.

American tales from the UK

I love hearing about Americans who are expats in the UK, and what their take on the country and its quirks is.

This is Pat’s UK Tale

I came to England while still working for the US Government. I managed to extend my tour until I could retire in 2000 after 35 years service. My partner is a Brit who could no longer stay in the USA, so rather than split our household after 20+ years, I retired here. We live in a community on the edge of the Cotswolds, not far from Cheltenham, Tewkesbury, or Evesham.

Since retiring I have become very involved with the local history society. I also do a lot of genealogy research — solving puzzles is so much fun. We love to travel, abroad and around the UK.

What do you enjoy most about living in the UK?
I felt at home immediately when I arrived. I grew up on Mother Goose rhymes and the King Arthur Legend and such. Those rhymes and other old sayings suddenly started to make sense.

I love the weather – or I did when we first arrived. Now it is getting very unpredictable, but the weather in the USA where we used to live (Maryland) is usually worse. I don’t like it HOT! Or super cold, either. Nice temperate summers and winters suit me nicely.

I love being in Europe. (Some Brits don’t think the UK is part of Europe, but technically I think it is!) We can reach Paris, Italy, Spain, Germany, in only a couple of hours. I love that we can buy European products easily in the superstores (supermarkets to the Americans). I love being close enough to London (about 2 hours) to have short breaks for going to museums and the theatre. And Cheltenham is a great for culture – it has a Jazz Festival, a Music Festival, a Science Festival, and, best of all, a Literature Festival – EVERY year.

I love the history under my feet here. Our first house in England was built about 1725, extended just after WWII, and extended again in the 1980s. I could look out of my bedroom window and see the bumps of an Iron Age hill fort; pottery from a Roman manor was abundant in the farm field across the road; major encounters in the Cousins’ War (or War of the Roses) and the Civil War took place around us.

Lambs in the spring! Poppies in the fields and along the road in summer.

What do you miss about the USA?
Not a lot, really. Small things. Foods like Atlantic blue crab (and Maryland crab cakes), Maine lobster. Fireflies in the summer. Screens on the windows! (In the heat wave we are having, windows open at night are a MUST, and that lets in the flying thingies that are attracted to light, like moths and crane flies – and the normal buzzy fly.)

What differences do you still encounter?
This is a hard one. Spelling differences, of course, and some word usage and sayings. When I was at work and someone asked me what my remit was, I had to think for a minute. It took me awhile to realize what “use in anger” meant – although I have since learned that this one is not widely known to Brits either. (It means used in an operational situation rather than in exercise or test mode.)

But, just because something is DIFFERENT doesn’t mean it is WRONG! It’s just different! If I couldn’t adjust, then I would have been long gone back to the States.

Lambs at the Cotswold Farm Park

The best thing about being an American in the UK?
Being oblivious to the caste (or class) system – and vestiges of it do still exist!
Not having to endure the endless campaigning of American politics, which get nastier and nastier the closer it gets to election day.

What myths, stereotypes and preconceptions about the USA and the UK do you think actually exist or are just a load of nonsense?!
I am not sure that Americans do not understand irony. Actually, I am not sure that Brits understand it, either. But the ones who think they do can be pretty smug about it.

Yes, America has a problem with overweight people – but so does the UK!

In what way do you think your life is different because you are in the UK rather than the USA?
Oh, my. Well, the NHS is a wonderful thing! I would be paying a lot more for my medications and doctor appointments, etc, in the USA, even with insurance. (And I maintain my insurance even though I am here because it is subsidized for me, being a retired US Government employee – if I drop it, I will never get it back. It has proved useful over here and when I travel.) Also, now that my partner is extremely disabled (and I am a full-time carer), the NHS has supplied grab handles, bath aids, pressure sore aids, visiting Occupational Therapists, Physical Therapists, and District Nurses. Her GP has even made a couple of house calls. Hospitalization is free if required.

I think roundabouts are a great invention, now that I am used to them. (I still would be nervous attempting the Magic Roundabout in Swindon, though.) But I do think they overdid it in Milton Keynes. 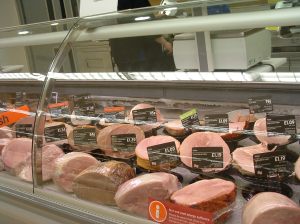 Ham in a supermarket!

Now foodie things. Pastry and desserts with CREAM really are made with CREAM. And there are so many different creams – single, double, extra thick, CLOTTED (now that is scrummy). A chicken salad sandwich is real chicken, sliced breast, with some lettuce and/or salady stuff. I amaze visiting Americans with the array of bacon varieties in the grocery, and the different crisp flavors, and the REAL HAM that is sold in so many ways. Cheddar doesn’t come in just Mild, Medium, and Sharp.