Posted on July 14, 2013 by ukdesperatehousewifeusa

I love a cowboy

I do. I love a cowboy, a cowboy show, shootout and all the cowboy paraphenalia.

Cowboys are so….so American. They say: we’re strong and rugged individuals who don’t wince at pain and can move cattle and have big hearts, and can wear leather chaps and get away with it, and help damsels in distress….. 😉

And we don’t have them in the UK. Okay, so the history with the Native American Indians isn’t so hot, and I do declare that I am fascinated by the Indians and their culture and history, but in a slightly different way.

Cowboys just say ‘Americana’ to me. I love a bit of the old Wild West even if it is at a theme park recreating a ‘Main Street shootout about a bag of gold that can’t be taken to the bank ‘cos it’s Saturday’. 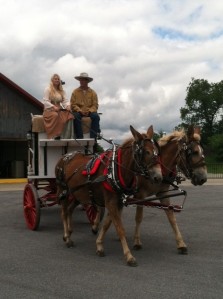 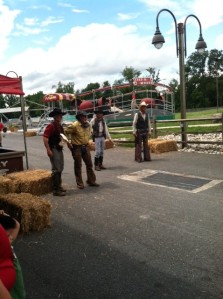 Get ready for the shoot out (average age of the cowboys = 65!) 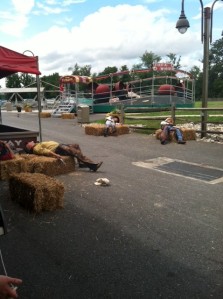 I love that this guy, Brian England, from England, who has lived in the USA for 41 years still has his London accent. Not a dot of American going on with Brian, and it’s refreshing to hear a good Sarf London accent as we sip on tea. There’s more than a touch of the charismatic ‘bloke from England’ about Brian, and it’s all good honest British humour and tales from his 41 years here.

I met Brian because he runs the very successful company BritishAmerican Auto, and is a bit of a lad about town here – a good lad, mind you. He knows the area of Columbia, and loves it. He’s on all sorts of committees and wot not from health to transport and has a passion for this place, which has only been around for a few years longer than he’s been in town.

BritishAmerican Auto’s reception has a touch of the museum’s about it – scrap books from when he and his wife first arrived; pictures dating back to the 70s and his first US licence. It’s worth popping into BritishAmerican Auto to have a nose at some of the stuff he has on display, as well as to get a cuppa and some car repairs!

This is Brian’s story

I was born in Bushey, Herts in 1946, I married Jennifer in 1969 and we lived in South Harrow until 1972 when we came to the US. We lived in Rockville for one year then move to Columbia. We have two children, Jill born 1976 and Sandi in 1979. We have three grandchildren Brynn, Gareth and Lucas. We lived in Oakland Mill, Long Reach and in Hickory Ridge since 1986.

What do you enjoy most about living in the USA?
Living in Columbia. Columbia is special; it is an incredible community, and we have many friends, great neighbors and very supportive customers. Then there are the 90+ miles of bike paths and acres of opens space and three lakes to enjoy.

What do you miss about the UK?
Family, wonderful pathway system, pubs and no matter where you visit there is a nice cafe (I read this as ‘caff’! 😉 ).

What differences do you still encounter?
Language, even after forty years words pop out that people don’t understand, recently I used the term “hat trick” and got a blank stare.

The best thing about being a Brit in the USA?
Having an English accent opens up conversations, it gives people an excuse to connect.

Brian has a well-earned rest; what a busy boy!

What myths, stereotypes and preconceptions about the USA do you think do exist or are just a load of nonsense?!
The amazing thing is that some Americans equate the accent with honesty; hey if that was the case there would not be any prisons in the UK.

PS. I have always had the feeling that you can make a difference and effect positive change. It might be slow and frustrating sometimes but it is still possible.

By being a member of Maryland Health Care for All which has influenced health care reform it has led to our company being on CNN, New Hour PBS, Fox business, NPR. It led to meeting the president at a White House Health Care forum on ABC, shaking his hand and giving him my health care input. I have spoken at hearings and round table forums at the executive office building with Nancy Ann Depola (White House health care policy director). I have spoken at news conferences with Senator Harry Reed and with Nancy Pelosi and other democratic leaders at the anniversary other health care law becoming the law. This forum led to my daughter and grandson being on CSPAN!

People have sought out the small business opinion and it has led to me being on the Healthy Howard Board, Maryland insurance commission health information policy board and other local health care boards and panels. 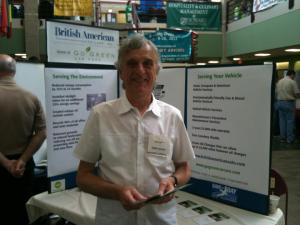 It has been an amazing ride and a lot fun. (Only is the USA? Maybe but as I have not lived anywhere else I will never know….)