Posted on July 12, 2013 by ukdesperatehousewifeusa

‘It’s pretty much the worst summer we’ve had in a long time.’

Harsh, harsh words to the delicate ears of a sun-loving Brit just yesterday. Come on, America-land, give me that sunshine! I know you have it (and I don’t mean that 105 degrees for three relentless, sweaty weeks with no electricity like you had this time last year.)

Stop messing with my sunbathing plans

The states of things in Baltimore

The shootings have totally dominated the news in Baltimore. Remember, it’s a 25 minute trip to Baltimore from our town, and I totally love bits and bobs of Baltimore, so when I read about the shootings, it really seems a world away from this bubble-environment I live in.

This is what they say about it: ‘The frustration over the recent gun violence continues to grow after two shootings, including one in Fells Point. City leaders are now working to control a dangerous mix of gangs and guns. Early Friday morning, masked men robbed a man at gunpoint on Beaumont Avenue in Northeast Baltimore.

More than 20 people have been murdered in three weeks.

And non-fatal shootings have risen a staggering 115 percent in the last month.

A Brit obsessed with American sports

And why not? There is much to love about American sports – well, I love the food, the atmosphere, the colour of the shirts etc – I’m not that in to the actual GAME…… but Matt is and this is his American story.

My name is Matt Renouf. I am currently a student at Southampton University, UK pursuing a Masters degree in Accounting and Finance. I begin a career training to be an accountant in September. I lived in America for four year from 2008-2012. For the first three years I was a student-athlete pursuing a Bachelor’s degree. I first went over to the states on a full-ride soccer scholarship. For the last year, I worked as an account manager at a small manufacturing company just outside of Detroit. I currently live with my parents at home in Southampton, UK.

What fascinates you most about the USA / what do you love about it?

I love America for a number of reasons:

1. As a sporty person, I love the US and American people for their love and dedication to sport and fitness. I enjoy always being able to turn on the television in the US and watch a game of some sort. I think that the scale, dedication and allegiances to University sports teams is unbelievable and something that nowhere else in the world can match at an amateur level.

2. The shear size of America is something I prefer over the UK. I find the UK to be quite claustrophobic and I do not buy the ‘cosy’ perception of the UK, many UK residents have. I like the big roads, big cars, larger homes and open spaces.

3. I am fascinated and in favour of the political perspective in America. I am for the capitalistic mentality and the emphasis on private property and hard-working profit seekers. I believe this makes for a more efficient economy and is a system designed for those who are motivated to succeed.

4. The weather. I love the beautiful summers where good weather is guaranteed and the contrast to the colder, snowy weather (Midwest region). I think it is a good combination of weather and you are able to do the sunbathing, relaxing or active things in the summer as well as great things to do in the winter such as skiing, snowmobiling etc.

Having visited or lived in the USA, what are your favorite areas/memories/traditions?

• I think that there is no where nicer to be in the summer than North Michigan. I loved being by the lakes, enjoying the beaches, water and water sports. North Michigan was home to some of my fondest memories.

• Another great area I love is Detroit. Although Detroit has got some bad perceptions I think it is a city that is really turning around and somewhere to definitely invest now for huge gains in the future. 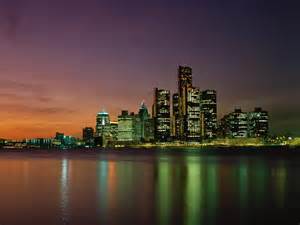 • My favourite city in America that I have visited is Chicago. I liked the size, skyscrapers and city atmosphere but was more impressed by the relaxed nature of city life and cleanliness of the city in comparison to New York.

• Some of the traditions I most enjoyed were 4th of July celebrations and Thanksgiving. I always will remember the 4th of July for being up north on the lake having BBQs, beers and good music. I will always remember Thanksgiving for being more family orientated and really enjoyed being around my girlfriend’s extended family for the celebration.

What differences do you think really exist between our cultures?

• Personalities – Americans are a lot more enthusiastic, customer service orientated and friendly. UK people often comment that they feel that US people can be fake when it comes to these traits. However, I perceive them as being genuine, welcoming and open people.

• Religion – religion was one of the first differences I noticed in American when I first went to university. The town my university in had 35 churches in it, servicing 40,000 people. That would be unheard of in the UK. The openness of young people in America to their religious believes is very different to over here. IN the UK, young people that go to church and are religious are often perceived as being ‘geeky’, ‘unsociable’ and not very popular. This is not the case in America. I also experienced a few times that parents would often use the threat of university education against their children that did not want to go to church. Some parents I knew would often say “if you’re not going to go to church this Sunday, we will not pay for your university education” – this mentality is wrong my eyes but showed me the seriousness of religion in America.

To church or not to church?

• Child and Parent Relationships – another big difference I noticed was the reliance young people have on their parents. In the UK it often seems that full independence for young people begins at 18. That’s when they start having to pay for their phone, having a part time job for money, having to pay for their car expenses. In the US, I often felt that this stage in life did not come until completely after university education at 21-22. This is also the start of being able to drink. But most young people I knew, their parents paid for all of their expenses: their car, their car expenses, their phone etc etc until a much later age. Hence, young people in America are a lot more dependent on their parents for a lot longer than those in the UK.

Chillin’ in the USA

About the USA: which myths, stereotypes and preconceptions about the USA and its citizens do you think really exist or are just a load of nonsense?!

• Overweight and fat – I think this is a huge preconception and stereotype which in fact I think is totally untrue. Yes, there are many Americans that are overweight. However, the proportion to the population of these obese people is very similar to that in the UK. I have often found that Americans are actually more active, more sport orientated and more willing to exercise than British people.

• Fast food – The level and scale of fast food availability is myth which became very evident to me in America. Which is why Americans often get the fat people stereotype. It is impossible to drive down a road without having access to a drive through or fast food of some sort, whether that is in a McDonalds type of place or even the gas station.

• Cosmetically Focused – I would say that the perception of Americans being cosmetically focused is mostly true. Americans on the whole are very concerned about having a nice body and especially having nice teeth. Something English people are probably less concerned about.

I loved reading this – Matt gives another perspective on the USA from that of a young Brit, who’s been close to the American youth culture. This is something I would so love to know more about – it is truly fascinating, especially the bit about the parent/child relationship….I see this burgeoning even among five year olds. Top stuff, Matt!