Posted on July 10, 2013 by ukdesperatehousewifeusa

American cars host a plethora of different bumper stickers, which tend to confuse and amuse me.

Many of them say how completely wonderful the driver’s children are, and that their various offspring have usually been one of the following: student of the month or week or day or half day or hour / played triangle in the marching band / led the football team to victory / completed nature camp with five gold stars for discovering a new species of otter faeces. You can tell I find them a teeny bit nauseating, perhaps?

Shouting about our children’s successes is just not something we’re overly comfortable with in the UK. If I had a bumper sticker it might say: Last Tuesday my son put his trousers (pants) on the right way round, for example 🙂 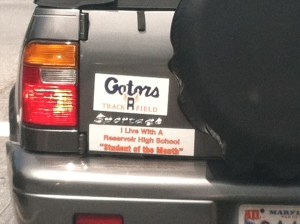 Last night my son corrected my British pronunciation and turned it into American pronunciation – that’s with a hard ‘a’, not a soft ‘a’……

This was the sentence: ‘I will show you the extent of my wrath’ (rest assured this was a SpongeBob Square Pants book – nothing too major – and the words were spoken by King Neptune, just so you get the context). 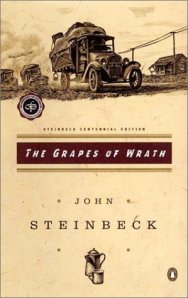 So how will Harry pronounce this….?

I find this hard pronunciation of the ‘a’ sound occurs frequently in the USA and I have to repeat certain words that I pronounce with a soft British ‘a’ with a hard American ‘a’ so that people understand me. Ah, the confusion of accents!