Posted on June 19, 2013 by ukdesperatehousewifeusa

Yes, the above title is how I view British politics in comparison to American politics.

So, I attended my friend Tom Coale’s shindig tonight where he declared his intention to be the Democrat candidate for the House of Delegates District 9B in Maryland. In the UK, that would be the equivalent of someone aiming to be the Labour party candidate for a seat in the Welsh Assembly (just in terms of size). Cool.

I am being a bit mean to UK politics because when I think of it I think of dreary suits and comb-overs and people talking in voices that drone on and on about park benches. I can kind of say this because I worked in PR in several UK councils. They aren’t all like that, of course, and sometimes it was rocking and fun and exciting, but tonight’s announcement was just utterly cool in the USA-stylie. 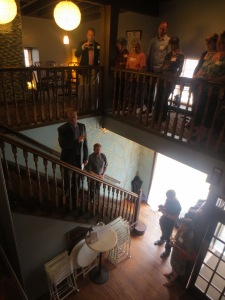 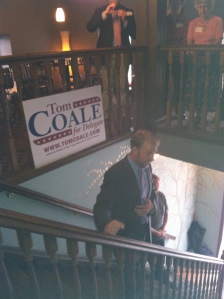 Delegate for District 9B

Joan Lancos and me in red!

In my head I visualise the UK equivalent taking place in a Jam and Jerusalem / WI church hall that has a damp wind passing through it from either a crack in the wall that’s never been repaired or the elderly organ player. Everyone is drinking extremely milky tea (the milk having been brought directly from udder to stainless steel milk jug by Dora, straight from her farm). The tea has passed many times through an urn that everyone proudly comments was used in the Second World War. People sip their tea from cracked pale green china-effect tea cups with mis-matched saucers and applaud quietly (since they are reserving their real enthusiasm for re-runs of Richard Whiteley on Countdown later that evening) and try not to drop their 99p custard creams when Roger announces his candidacy for Somewhere-upon-River.

And that is how I, rightly or wrongly, view the difference between USA and UK politics 😉

This is the sort of thing 🙂

I am, of course, being incredibly rude to the UK WI and people who make things happen in the UK. Tongue in cheek and all that…. 😉

I don’t know anyone in the UK called Skip. It is truly an American nickname.

I made sure I introduced myself to Tom’s dad, Skip, and told him that he was the first Skip I had ever met (actually, I think my dad had a dog named Skip, but I never actually met him).

Anyway, now I have met a Skip, and very charming he was too.