Posted on June 6, 2013 by ukdesperatehousewifeusa

Wrong side / right side of the road

Every time (and I mean every time) I get in to the car and drive I do consciously still say to myself ‘drive on the right, drive on the right’. (Note, I still do sometimes inadvertently go round to the passenger side of the car with the intention of driving and then pretend that I was just putting my bag in / getting something / sorting something out.)

However, it is incredibly disconcerting when you are heading down a highway/freeway/road with two lanes going one way and you are in the outside lane and a flipping car is coming towards you.

(I still don’t know what the different roads are called and what the difference between Interstates/highways/freeways are – rest assured, this will be rectified via Google – fyi, in the UK we generally call those ‘dual carriage ways’.)

Anyway, as the car was coming towards me, my head went like this:

Poor lady, she was probably having a right old panic attack. In fairness, it is quite easy to pull out into the oncoming traffic lane (even for the natives) – expecially if there is no oncoming traffic and you don’t actually look at the road signs and arrows and no entry signs…… 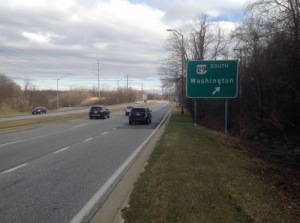 It kind of messed with head for the rest of the drive, but no one was hurt, so that’s the good news. (And total relief and a little bit of smugness that it wasn’t me, the expat Brit who learnt to drive on the left/correct side of the road 🙂 )

Americans don’t all speak the same, that we know. How we UK gals love the Southern accent in the USA. The drawl, the lilt, the cowboy in chaps, the check shirt, the doe-eyes….oh hang, is that just me getting carried away with current obsessions with John Ross Jr. in the new Dallas? Anyway, we love the Bronx twang and the………..um, I can’t think of any others that we love, but there we have it – at least we recognise the difference in accents. 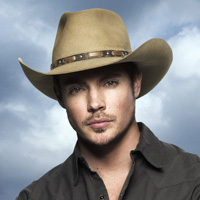 I’ve mentioned that my husband is a Cockney and sometimes our American friends find him hard to understand. But sometimes there are words I have to ask to be repeated also by Americanos. And this little gem of a piece tell us exactly that – the pronunciation of many words differs greatly from State to State.

Regional accents are a major part of what makes American English so interesting as a dialect, much like British English has so many variations.

The pronunciation of “caramel” starts disregarding vowels once you go west of the Ohio River.

For whatever reason, it’s a “boo-wie” knife in Texas and DC.

Americans can’t even agree how to pronounce crayon.

The South is the only place where you’ll try to call your “law-yer” instead of your “loyer”.

It’s fascinating stuff! I always want to call the town ‘Bowie’ like we would David Bowie, but that it ain’t! 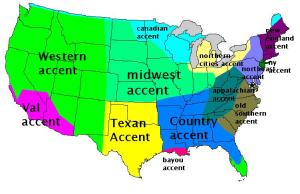 Watch this for Hugh Laurie’s British / American chat / chinwag about the differences between our words:

We haven’t heard much from Martin recently, so I thought I would just refresh our memories about what he looks like 🙂 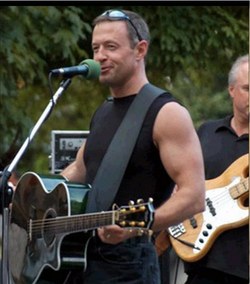 And with that I bid you adieu for today!