Posted on May 16, 2013 by ukdesperatehousewifeusa

It is soooooooooooooooo hard to get cabs here in Howard County. I shall never, ever again bemoan the UK’s public transport system, because at least you can get from town to town or city to town and back again on a bus or a train. Not here – well, not easily.

And because there is no public transport, you try the cab firms for a lift…….

I have concluded that the cabs here officially SUCK. They won’t take your call, or if they do they put the phone down, then they can’t be bothered or can’t understand us, or just don’t want to drive anywhere and pick you up.

I might open up my own cab firm, just to show them how it works.

It’s kind of odd, because in the cities we have visited the cabs were great – let’s not forget my excitement at seeing the Yellow Cab in New York – iconic! 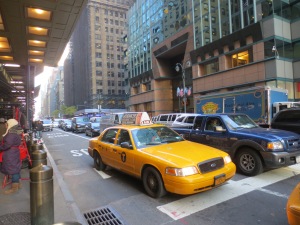 I love a yellow cab – bring them to HoCo!

No wonder there is a little bit of a thing for drinky-driving in some areas…….it’s because you can’t get cabs for love nor money.

(And for the record, they do not understand British Cockney, Northern or even Home Counties accents if they don’t want to! By the time you’ve spelled out the address for them, you might as well have walked home……) 😉

Some people just stumble across my blog by tapping other search terms into Google. This most recent search term amused me: ‘hot housewife in leather.uk’. How disappointed they must have been to have found my ramblings instead.

This venomous Northern Copperhead was spotted by a friend in her garden. WFT? Venomous snakes whilst I’m in my flip flops and Daisy Dukes. No thanks, ever so much…..

4. Another murder in HoCo

Howard County is SAFE. It really is one of the safest places in the USA.

In 2012, there were a total of four ‘homicides’ in Howard County.

However, another man was killed last night after being shot multiple times in the town centre of Columbia.

This homicide is the third in less than two weeks in Howard County. On May 4, 47-year-old Deborah Castellano was found shot to death near the Oakland Mills Village Center. Police arrested her ex-boyfriend, Ryan Matthias, in North Carolina on May 11, he is set to be extradited to Maryland to face charges in Castellano’s murder.

And the community is still in shock over lovely gent and local blogger Dennis Lane. We can’t quite get our heads around this one. Please take some time to read my friend Tom’s blog, which pays a wonderful tribute to Dennis.

If you’ve followed this blog for a while, you’ll know I’ve struggled to find a radio station that I like out here. I’m a BBC Radio 2 gal back in the UK, and nothing was fitting that mould in America-ca-ca. I wanted music (from Lynyrd Skynyrd to Pink) and news (current affairs and little bit of popular culture) and conversation (but not too much).

I found Mix 107.3 and thought I had reached as near to my requirements as I could get. But then it all fell apart. The husky voiced Brooke Ryan left the morning show, so my school run in the morning was a bit less fun, and then Jack Diamond headed out too, so that was the end of that. I tried the new morning show, but it was just a bunch of self-indulgent people chatting on and on and on (and even I was offended by some of the stuff they were spouting forth), plus there was no music in a whole 25 minutes (not good), so I have been switching between stations constantly over the past two weeks.

Then I happened to tune in again this very morning, and listened with joy to the uproar of the Washington DC and Maryland radio-listening community. They hate the new show – I mean REALLY hate it (only a few exceptions). It’s crude, childish and just painful to listen to.

It’s not funny and it sure ain’t clever!

Here’s what the listeners are saying on the Mix1073FM FB site:

‘I understand this is a business and I don’t blame you or hate you for what has happen on Mix 107.3 Any rational person should understand it’s a business and change is good but it is always uncomfortable at the same time. I am a Military vet who wore the uniform for 21yrs and I am one who understands that “change” is a necessary part of life. At the same time, even though it was not your (sic) doing, all of you could be a bit more professional about it. Mocking the listeners who called to voice their concerns after YOU invited them and even offered money is a childish thing. I get it, you are “edgy shows, a PG-13 Show” but at the same time understand that the listeners of the JDMS were not given a warning or a learning process. As professionals I would hope all of you would act your age and give your profession a bit more respect.’

‘Not impressed by the mocking and crude remarks. The Jack-Off Comment was crossing the line. I know Bert was not the one who said it.. But ,,,,, It was really low class. I give up not going to listen to it anymore. After 24 years and being one of the original 7 listners (sic). It’s over you don’t care about us, You have turnd (sic) us off, Now I turn you OFF’

‘Well I think if WRQX & Cumulus wanted to capture the 13yr – 17 yr. old male demographic in DC, NOVA & MD they signed up the right syndicated show. If the show is suppossed (sic) to be “edgey” (sic)& willing to take a few chances w/their humor”…it fails. This is DC not Atlanta & The Bert Morning Zoo gym class story telling comes up way short in market requiring a more sophisticated (smarter) approach. Clearly WRQX is targeting a very different audience or they forgot what city their in. What works in Alpharetta, GA doesn’t always transalte (sic) to Arlington, VA’

Ooh, such controversy! I’ve been tweeting Brooke Ryan about it as I need to say my piece too – see the right handside of my blog for my tweets. (I also want to go and hang out with Brooke in DC and have cocktails, because she looks like SUPER fun, so when she reads this, if she doesn’t get back to me and take me out for drinkies in DC so that I can blog all about it, I will be a very disappointed Desperate Housewife 😉 )

It’s your round Brooke – mine’s a Mojito, please 🙂

Check out the new show, called The Bert Show, for yourselves…….and make your own mind up!

Chris Evans, Simon Mayo, Radio 2 – all is forgiven….I’m tuning in now for the Drive Time show 🙂